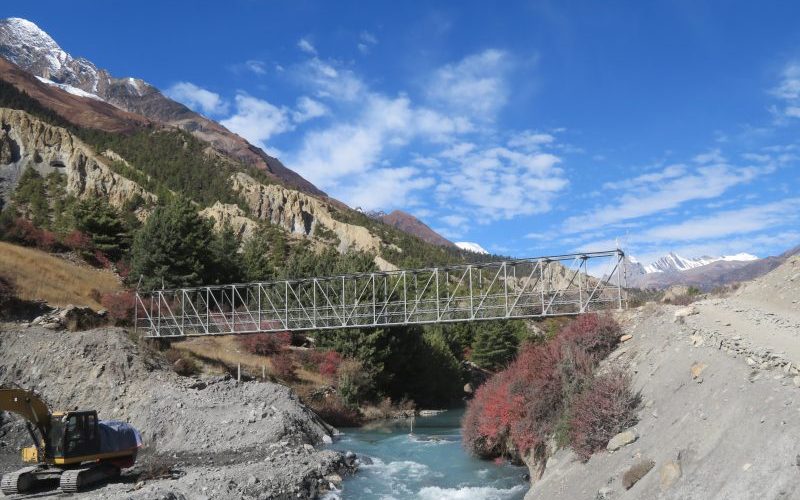 Nepal – a country of nature and diversity. In terms of natural, cultural, ethnic, religious, biological diversity, Nepal is a master piece in the entire globe. The majestic Himalayan ranges in the north claim eight out of the fourteen highest peaks in the world, including Mount Everest (8848 m) the top of the world. The alpine hills and valleys, with snow fed rivers, the lakes in the central region and the dense tropical forest in the south with its rich variety of wildlife, present a fascinating combination of nature and adventure.

The Annapurna Circuit is considered one of the best treks in the world. The Annapurna Circuit trek can be done clockwise or counterclockwise.The trek goes counter-clockwise from Besisahar. You will have the opportunity to view some of the most spectacular views of mountains: Annapurna II, (7,937 m), Lamjung Himal (6,983 m), Annapurna III (7,555 m), Dhaulagiri (8,167 m), Langtang himal, Gangapurna, Annapurna I (8,091 m), and a visit to villages of different caste of peoples with different religions. There are four regions or district which will be passed through on the trek: Lamjung, Manang, Mustang and Myagdi with lush green subtropical valleys with villages and terraced farming.

Manang Village is an isolated and also one of the most prepossessing valleys in Nepal. In the close vicinity of Tibetan border, this valley has its own history among the yak and salt traders of Nepal and Tibet. Manang valley is still used as the yak and salt trading point and it remains one of the important trading points in the northern border of Nepal. During the time of King Mahindra, this valley was declared as the trading point of Nepal for the East-Asia. Since then many of the Manang people have relocated to Kathmandu and other places but to those who still live there, this is a most significant place. Opened to trekkers in 70’s, Manang Valley has been one of the preference destinations among the trekkers who are travelling Nepal.

The most intresting point of our travel will be the cross ‘Thorong-la’ pass,at 5,416 meters or (17,769ft.) from sea level. Jomsom will be the last part of our Annapurna Circuit trek. The pass is located on a trail which connects the village of Manang in the Manang District to the east, with the temple of Muktinath in the Mustang District to the west. This pass is highest point during your Annapurna Circuit Trek. You will have to acclimatize properly to pass through Thorong-La to get to the western part of the trek, The Mustang District.

Pokhara is one of the most popular tourist destinations and the second most visited city in Nepal. It is famous for its tranquil atmosphere and the beautiful surrounding countryside. Pokhra lies on the shores of lovely Phewa Lake. Three out of the ten highest mountains in the world can be seen from Pokhara (Dhaulagiri, Annapurna, Manasalu). The iconic Machhapuchre (“Fishtail”), with its distinctively pointed peak, has become the icon of the city. Pokhara will be our final destination before reaching to the capital, which makes it the perfect place to celebrate the end of the trek.